I was one of the founders of the human rights organisation Al-Haq in 1979 and remain proud of its work over the past four decades in defending human rights in the Israeli occupied territories. I was horrified when it was declared to be a terrorist organisation by the Israeli defence minister on 19 October, along with five other Palestinian NGOs.

During the many years of direct Israeli occupation, from 1967 to 1995, there was a long and expanding list of proscribed groups issued by the Israeli military commander under “emergency” regulations first put in place by the British in 1945. Al-Haq was never on this list.

In 1980, an Israeli army patrol passing by Al-Haq’s small office in Ramallah late at night became suspicious of the cars parked nearby and stormed the meeting, roughing up some of the staff. At the time a representative of Amnesty International was attending the meeting. When we lodged a complaint the army began an interminable investigation of the incident, which after many years was still not concluded. Yet the storming of the organisation’s office was never repeated – not even during the reinvasion of the West Bank in 2002, when offices of a large number of organisations in Ramallah were trashed.

Israel’s charge against the six NGOs, which include groups that offer legal support to prisoners and a women’s rights organisation, is based on a supposed connection to the Popular Front for the Liberation of Palestine (PFLP). Over the years, this claim has been used by Israeli officials to justify their refusal to permit travel for Al-Haq staff. The claim was that Al-Haq was not a genuine human rights organisation, but a PFLP front. Yet this unfounded and patently untrue accusation was never followed by issuing such a devastating order as happened last Tuesday.

B’Tselem, an Israeli human rights organisation that Al-Haq often collaborates with, has described the Israeli government’s declaration as “an act characteristic of totalitarian regimes, with the clear purpose of shutting down these organisations”. The policy change is evidence of how far Israel has gained confidence in feeling immune from the consequences of its actions, in this case interfering with civil society organisations that do tremendous work in the West Bank.

The declaration was made by the Israeli minister of defence and was issued under Israeli law. Where the West Bank has not been annexed, Israeli law does not apply, so it will probably be followed by an order from the military commander of the West Bank, adding Al-Haq to the list of proscribed organisations. Even if this action is not taken, Al-Haq could be paralysed by the order of the defence minister. Under counter-terrorism law, Israel can use its extensive powers over organisations and residents of the occupied territories. These include preventing funds from reaching Al-Haq. Israel can also detain anyone working for the organisation, providing professional services or expressing support for it.

Condemnations of the Israeli action has been extensive, including from the US state department, which sought clarification from its strategic partner. Yet statements alone will not suffice. Stronger measures will need to be taken if Israel is to reverse this declaration.

Al-Haq’s standing over the past 40 years proves its significance as a major defender of human rights. Its most important work during the past year has been the assistance it has given to the international criminal court in The Hague in its investigation into alleged Israeli war crimes. That the ICC might end up charging any Israelis with such crimes greatly worries Israel. For us Palestinians, it would herald an end to Israeli immunity from prosecution for its grave breaches of international law.

The defence minister’s statement will not convince anyone who has worked with Al-Haq and benefited from its extensive coverage of the human rights violations committed by Israel over the years. It is time for those concerned around the world to take a strong stance and work at convincing their governments to stop obstructing the ICC in its efforts at bringing to justice any Israeli official who has committed war crimes. 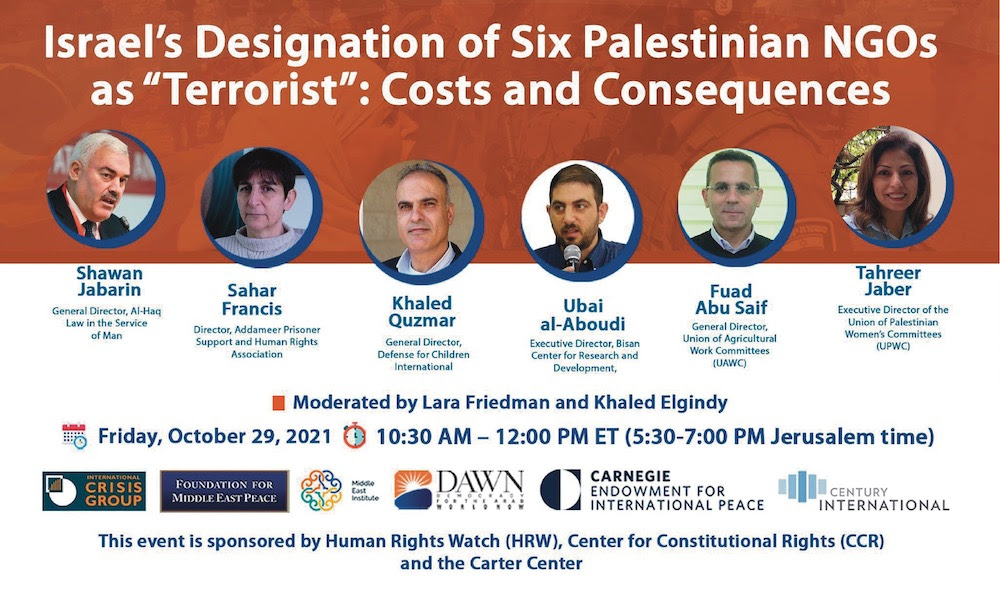 The webinar (above) with leaders of the 6 banned Palestinian organizations (October 29, 2021): Israel’s Designation of Six Palestinian NGOs as “Terrorist”: Costs and Consequences—recorded